The 20th of July was another in a long string of hot days, and so, naturally, I was watering the garden. The garden in question was on a strip of ALR land within the Galiano Conservancy’s Ken and Linda Millard Learning Centre, but the soil could hardly be considered arable.

A dense, compacted, nutrient-poor clay that bakes until it cracks in the summer and turns into a quagmire in the winter, it was barely hospitable enough to allow the plants we grew there to survive. Yet that was as far as its largesse extended. Perhaps that’s why, a couple years back, someone built small berms with woody debris and brought in some commercial soil to cover them. This provisional hugelkultur bed—with the wood providing moisture-retention and slow-release fertilization services—didn’t end up being any easier for our crops to master, and so it lay fallow this season. 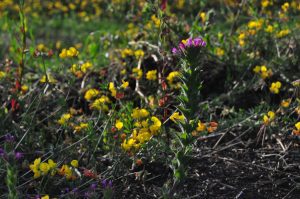 On this particular day, though, a small population of plants I’d never noticed before was positively thriving on top of and around these abandoned hugelkultur beds. Curious, I stepped in for a closer look. I recognized the flowers (characteristic of the Evening Primrose family) immediately. However, the species itself was too diminutive to be fireweed (Epilobium angustifolium) and too gangly and exuberant to be part of the ubiquitous and weedy willowherb (Epilobium ciliatum) complex. This was unmistakably its own species, and for all its lanky enthusiasm, it sure did have some attractive flowers! I had to give it props for thriving in desiccated, disturbed soils that would support little else.

Turns out, I’d stumbled upon one of only a handful of populations of the red-listed species dense spike-primrose (Epilobium densiflorum). This ruderal species, which thrives in disturbed, open meadow environments and waste areas, is one of a whole suite of opportunistic annual wildflowers that have really suffered due to fire suppression, grazing, invasive competitors, development of open areas, and loss of vernal pool environments. Its numbers have declined appreciably in the last several decades, and over 95% of its potential habitat in BC has been converted. While it remains widespread throughout the western United States, its only Canadian populations are in the rain shadow environments of southeast Vancouver Island, as well as in ephemeral populations in the Gulf Islands. Unfortunately, you could count these populations with your digits and still have toes to spare—the total space they occupy is less than 0.1 km square!

The big question is how dense spike-primrose showed up at the Learning Centre. Its seeds, unlike those of most of its congeners, lack the characteristic tufts of hair that enable wind dispersal; thus, they don’t travel far. It’s possible that its seeds came in on the soil from Vancouver Island, but unless the supplier is located on top of one of the extremely rare remaining populations and doesn’t heat treat its soil, this seems pretty unlikely.

When I contacted regional expert Matt Fairbarns of Aruncus Consulting, he told me, “It’s a ruderal so it’s built to spread even though it lacks a pappus. I believe that many of the native ruderals took a kicking from European invaders and so are no longer as widespread as they once were—it’s a bugger when your niche disappears. Explore your area and see if you can find the motherlode.” So, its habitat characteristics are entirely consistent with where we found it. Perhaps it just needed the right conditions to return from dormancy.

I haven’t found the motherlode yet, but I haven’t stopped looking…

In the meantime, the GCA has been keeping track of the population and protecting it from overzealous weed-whackers in the garden.  Seeds were collected this year to include in mixes to cover the bare soil in the GCA’s latest restoration project: a native plant forage forest on an old clearcut site. No records exist of Coast Salish people using this species, but indigenous peoples in California included its edible seeds in the traditional food pinole, which includes the seeds of a range of meadow species. Hopefully our little red-listed friend will thrive in turn at its new digs. I know I’d certainly appreciate its spectacular displays of swaths of pink flowers in the dead heat of the summer. Flowers immediately recognizable as belonging to the Epilobium genus 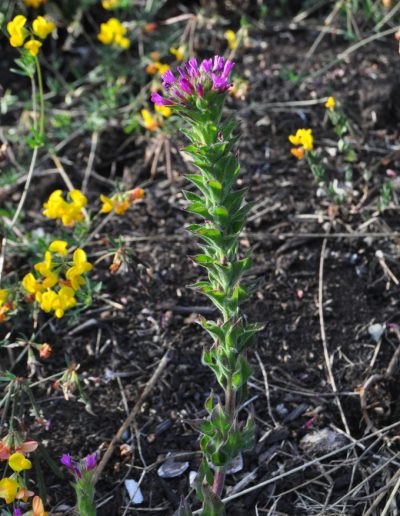 Borne on dense spikelets, the flowers are the namesake of the species