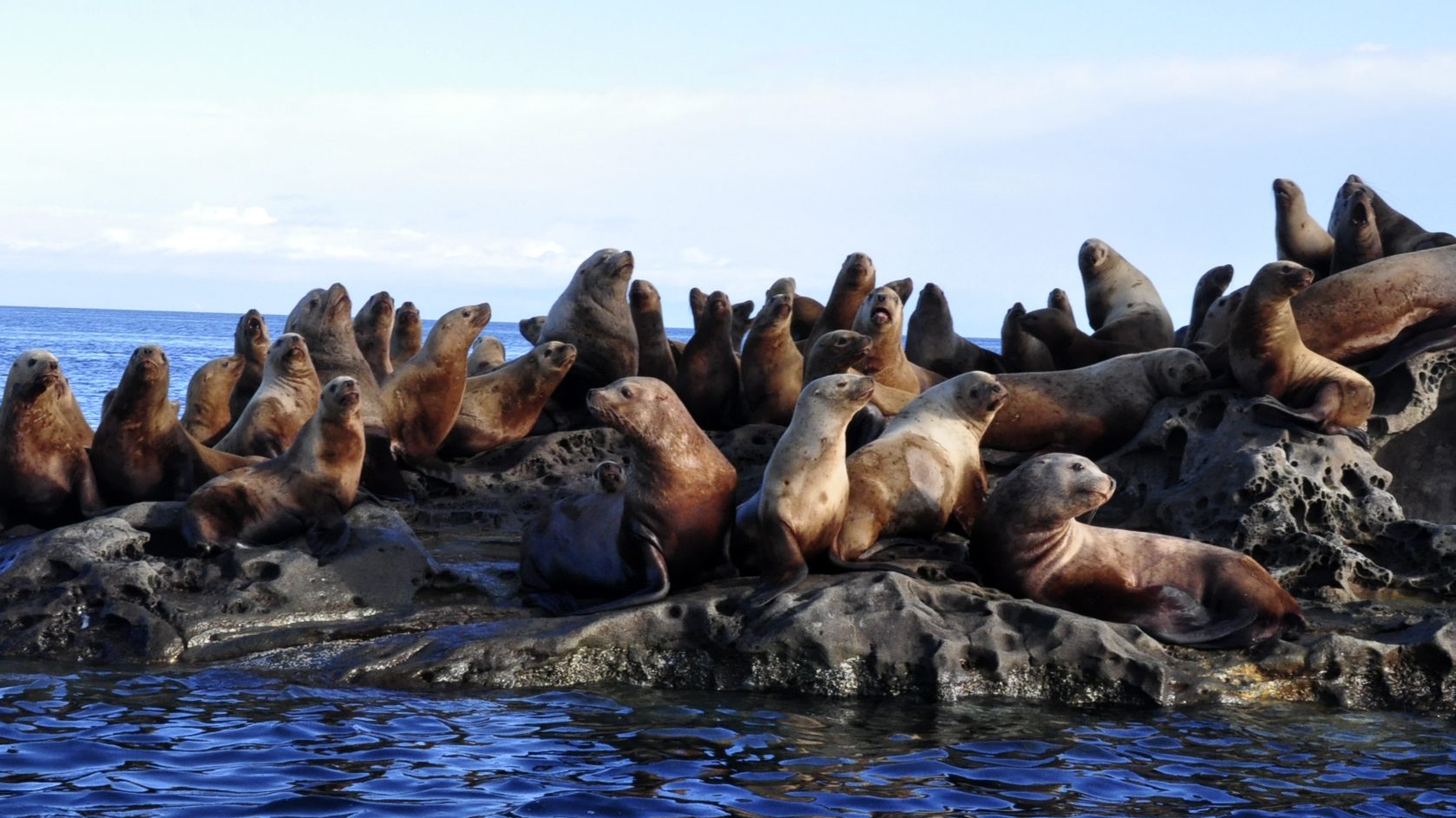 On Canoe Islets, a set of near-shore rocks off the southeast coast of Valdes Island, a large colony of Steller sealions (Eumetopias jubatus) can be found congregating during winter months. I had the chance to witness this spectacle up close the other year, on a boat ride to Valdes.

Over the loud cacophony of barks, snorts, hisses and grunts, I heard the question arise among our crew: “How does such a large number of such huge animals sustain themselves here year after year?” Good question, I thought to myself, knowing this area had long supported not only the Steller sealions, but also the traditional sealion hunt conducted by the local Hul’qumi’num people (not to mention transient Orcas).

So just how much biomass are we talking here?

Steller sealions are the largest among all other sealion species: a mature male (twice as large as the female) can weigh as much as 1,120 kg! Consider an average mass of around 450 kg, then—that multiplied by how many individuals? A conservative estimate suggested 200 were present at Canoe Islets, at least. That’s roughly ninety-thousand kilos of bone and sinew, muscle, blubber and fur. Without a doubt these hulking mammals must have a considerable impact on the local fish stock in Porlier Pass.

Pondering their diet, I gazed in awe at one full grown adult male’s gaping jaws. The first thing that came to mind was the thought of it swallowing a Pacific cod whole! Stellers can perform this feat underwater, which is astounding considering how large those fish are themselves. How many cod do you suppose it takes to sustain these animals over the winter?

Mature Stellers are known to eat as much as 10% of their weight in a day (or night, which is when they tend to hunt). A hefty Pacific cod weighs in at around 15 kg. So the math works out to about three cod per day for your average sized Steller: enough protein to cover the needs of about four dozen sedentary human beings—for a week!

What does that amount to, then, for this colony of 200 sealions? Something like six hundred Pacific cod, or the equivalent of 9,000 kg of seafood in just one day! Again, to compare with the ecological demands of our species: the DFO estimates the total annual commercial fish landing has averaged 185 million kg over the course a decade (from 1997–2007). The BC population of Steller sealion (20,000–28,000 as of 2006) is estimated to consume about 110 million kg of fish annually.

Life in the Salish Sea must be abundant indeed to feed the thousands of Steller sealions which move through annually, when they leave behind their northwest coast rookeries and haul-outs on the outer coast of Vancouver Island. 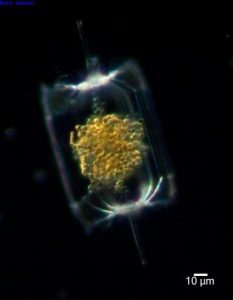 Yet if there is one thing more amazing to consider than the amount of seafood consumed annually by these giant creatures, it’s that all that biomass ultimately derives from the light of the sun, combined with water, a few nutrients, and carbon dioxide. Locally, Stellers are known to consume Pacific cod, herring, salmon and rockfish, some Dungeness crab, squid and perhaps your occasional giant octopus. Yet when you trace out the marine food web, they ultimately depend on algae, or tiny, single-celled, photosynthetic marine plankton, such as diatoms.

Think of that when you witness your next algal bloom—perhaps when the sediments of the Fraser are released with the coming spring freshet. Ditylum brightwellii is a prolific diatom species which divides rapidly and contributes to such phytoplanktonic blooms. It weighs in at about 0.19 µg. How productive do you suppose these tiny photosynthetic organisms have to be to raise a single Steller sealion?